The bus broke in the middle of rocky desert, while we were climbing the steep curves in southern Morocco. The smoke choked us, 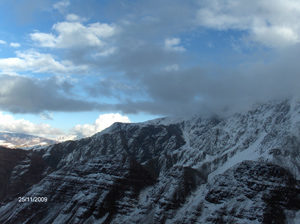 the smell of grease and broken vertebrae from the engine filled the air- 16 journalists from the USA, Bulgaria, Belgium, Spain, Romania, Ireland, Macedonia, Switzerland, were dumped on the road to the city of Ouarzazate, known as the Door to Sahara. This company was just part of over 200 journalists from 33 countries, brought close by their common hobby-winter sports and the exotic opportunity to ski in Africa. In Morocco, 80 km from Marrakech there’s enough real white snow up high, even though during the day the temperature rises up to about 20 degrees. February. Africa! Peaks of the High Atlas reach almost 4000 m and that triple mountain range was considered a barrier between wilderness and civilization, and even the end of the world by ancient voyagers. Atlas in mythology carries globe on his shoulders over the ocean and over nothing. The nothing, in which we found ourselves, because of the broken bus, but still we were before the pass, in the lower arc of olives and oranges in the soft boomerang outlined by the Mediterranean Sea and Atlantic. The driver started complaining. The leader of the group also panicked- a Belgian newspaper publisher, but of Moroccan descent, he at least spoke the local language. All the time of the world landed on us, because there isn’t that much to do without the internet on the edge of the desert with little water available.

Initially we were in the mood to talk about the extraordinary week of skiing left behind us. 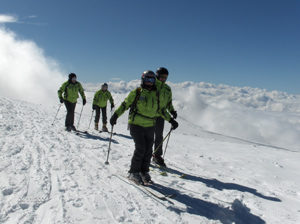 Asside from deserts sand and stones, Morocco has two ski resorts – Ifra and the classier Ukaymden, only 80 km away from Marrakech. Because of its pinnacles it resembles Malyovitsa. The first lifts were built in 1932 when the foreign legion and, in particular Frenchmen brought the fashion of skiing. In 2010, 200 journalists made right here their race for the journalists World cup. For route and control of the giant slalom took care a Spanish team from Sierra Nevada, which organizes in Ukaymden an unprecedented skiing race for the same athletes, journalists. As a tradition since the 30s, today the Berbers from the mountain villages around supplement their budget by four-legged taxis, so Ukaymden is the only place in the world where the slopes can be reached riding a donkey from the hotel.

The package price( ski equipment included) is paid in local dirhams, but it’s actially less than 1 euro. Much more fun than to go by public transport from Nadezhda and switch to tram at “Halite”. 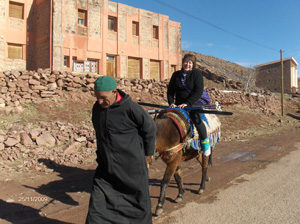 For the same price, I’m ashamed to admit, when turning on a cliff the hooves of the barbary donkey slid, the skis tilted me to the side and I saw myself slipping from the saddle and crashed ner its shoes. Wow, you can’t imagine how I was flying overthe tracks, after I fell from the donkey! Objectively, in the race I took the moderate position No.12, although I had won two silver medals in previous years, a quarter of a century ago. How time flies! The winter sport is an imported icing on the cake of tourism in Morocco. One snowy afternoon Driss Geraui, Political Advisor to the Prime Minister, came to Ukaymden to tell the Plan “Azur”. The Blue strategy was supposed to bring 10 billion euros revenue in 2010 Morocco. But the crisis came to Africa, this ambitious goal has not yet been reached and is carried over to 2020 supported, by the way, by the priorities of EU policy in the countries around the Mediterranean. If in the Atlas Mountains – and they are like three chains or three fingers of the same hand – have passed in January 2010, tens of thousands of Europeans and Americans, then only on the magic square Cemal El Fnaa in Marrakech such overcrowding is walking every day.

That place has everything! People swallowing knives, snake charmers, fortune-tellers and veiled grandmothers-painters, who in seconds tangle a lace of henna on the hands and feet of women. 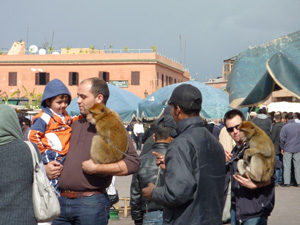 Sellers of water, girded leather bottles, glasses, that look like bells and hats against the heat, roam around in slippers in the winter – this is it- the sevear season in Africa! According to legend, if a monkey jumps on your back, you’ll be healthy throughout the year. So it’s full of monkeys along the dozens of stands overflowing with oranges. The sweetest orange juice gets squeesed for only 60 cents, and it becomes clear how in your life up until now you drank from only half of the periodic table. Heaps of dates on branches and palm trees under which they say that some dealers offered cigarettes and various grasses, Everything can be bought! Pay or Die! I was snaping the camera like crazy in the direction of the curling of cobra on the megasquare. The snake charmer, sitting behind it blew his deafening whistle and suddenly I felt another snake slipping in my sleeve. A real one, small, yellowish and clearly deadly. I was so scared, I couldn’t move, opened my mouth to scream – and in that second the viper’s master hissed in my ear 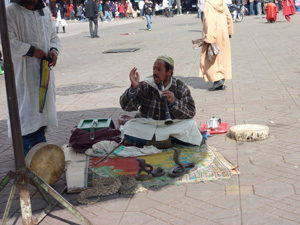 “Pay or die”(in English).
Pay or you will no longer sing, damnit. The sound of all my available coins thwarted the lizard’s attack. The blackmailer aptly pulled it infront of himself and went to other tourists, that was his business, but in a moment I saw the eyes of the snake and found my life ridiculously taken. I imagined how it ends, the film breaks and the cinema collapses. The fear had frozen me a muscle strain, fire and ice. On the side of the stage of megasquare are stretched hundreds of square meters of carpets. They pale at the sunlight as an advertisement of manual labor and a deafening clack, thump, booming throats and shouting, musicians with white turbans, stepping in dance over the grayish mud and bollocks from all sorts of creatures. At one end of the street, that night lives with even higher revenues, they boil in the kettles snails and lamb heads, but even the heat treatment does not guarantee that you won’t get sick right infront of the mosque El Kutubiya. 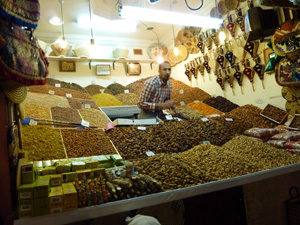 My breath is still stopped at the diaphragm. Ofcourse thy’ll lie to you. My companions complain about how they bought a bag of dates 300 times more expensive than in the next street. There are almost no tourists, but Iliantsi looks like a rural bench infront of a mall. They diverge – and is a wonder how no pedestrians bump into people from all backgrounds and traditions, cyclists, motorcyclists, cars, horses, carriages with coachmen, cars, buses, all blowing their horns. Well, we were headed for the door of the Sahara desert and the capital of the saffron. We were squatting on the road to Ouarzazate and listenning to the stories about local tribes. We were impressed by the blue caftan and the Tuareg turbans. They wore silver talismans with the Cross of the South, which served at night as flashlights and which served as their passport. We remembered the kasbahs with the soldiers in red- just like the local adobe and earth, the typical reddish-ocher- a symbol of Marrakech, and Morocco. Jean-Pierre, a Belgian has turned one such kasbah into an oasis where tourists from Western Europe spend a week coddled by a azure pool, spa procedures with argan and local grasses, I do not want to go into details with them. We had reached the shore of the Atlantic to the caressing waves of Esauira, a port-fortress, where the ships holds were filled with slaves and emigrants for the White world. 40 percent of African-Americans or their ancestors departed from this very port of Timbuktu, which at one time was a Portuguese colony. Therefore, on the shops of its streets flaps a sad fadeau and seagulls squeal over steaming trays with fresh ocean catch … The trigger of fate and the broken bus, however, had left us in a fallow on the roadside. It did not exhibit any signs of being a very high-traffic road, the movement was scarce. But even in the nothingness, hope shines somewhere and it’s carried by the cries of three berber women – aunts of undeterminable age, shrouded with a bandana. On their incomprehensible language, but they most clearly didn’t mean us harm, they tugged us in the first house in a nearby neighborhood. I dare not say village because their houses were not more than four or five. 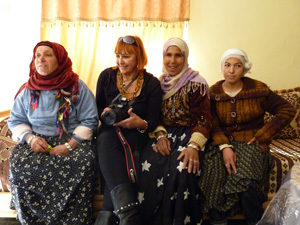 Clash of Civilizations
We stepped over the gate – generally impressive in the oriental world, always the barrier to the intimate world is more stable, and even brothels have strong and decorated gates. Behind the door we entered a perfectly swept yard with an earthen floor. It was cool as if in paradise. We saved ourselves from the biting February Sun and stumbled directly behind a wall in a house without clocks. We were dying for a sip of water and some shade, and we were even pleased to be the unexpected prey of the berberkits. In gratitude we gave them the stocks of gum and candy, and the women squealed with joy at our lipsticks and pens. They sprayed us with aromatic essence – such was the custom to honor guests.

They treated us to some tea – and reverently rushed into the kettle three or four lashes of saffron for miraculous power. 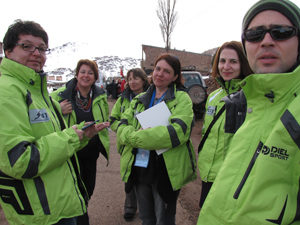 In this area there is a cooperative of women who grow and dry crocus, the most expensive spice in the world. And in this house, which had couches along the walls and hung the portrait of the king, had the more expensive than gold saffron. At that time on the road came the happy ending to the mishap – one even more rattly van with tassels on the windows, and it was like another engine was working separetly just for its horn. The Berbers would not let us leave. They had real fun, and we did too, while masking us as brides with their draperies and clinging strings of stones and silver. That was more sincere than all of the entertainment television and reality shows we were fed up with, while our new friends had obviously never dreamed of either television or a newspaper …