As architecture Deauville also stands out – dark wooden beams cut through the geometric facades, windows follow the style of expensive stained glass masts of yachts can see their reflections in them- they’re that close to the ocean. For people, who don’t want to stay at the overpriced Deauville, right next to it is the simple Truville. It’s also a holiday village with 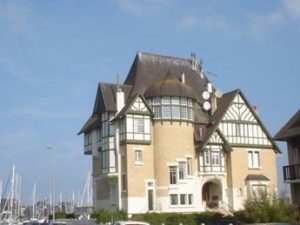 a Norman pastoral idyll, with apples, butter and cinnamon, with images of angels and naughty young shepherdesses. Not that Trouville is not full of tourists, it just sitsnext to its neighbor, Deauville, untouched by Fame and stardust. Almost all taxis in shiny as Deauville are Bentleys. Instead of contradicting to French chauvinism it is considered as fitting in the landscape hospitality, complete with plenty of pretension and snobbery. Deauville is just an hour or so drive from Paris – with whatever vehicle you choose to travel: car, plane or train, so any self-respecting aristocrat has made sure to have at least a house if not an estate or an entire floor in Deauville. The resort is so special that even umbrellas have their own history, they even shadow the musical biography of an other set of umbrellas.

In Deauville, they are bright green, red and azure blue, bandaged with a kind of scarf in the same contrasting colors. This specific 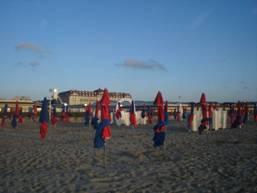 bandage serves according to the weather as a cloak, or bedding, or a blanket, or most often as awning for wind, as well as for decoration. If you take the road on the ocean coast of France, by those umbrellas you will recognize that you are in Deauville, reveals Elitsa, a student at the Sorbonne, and leads us to the hotel where the jury stays and VIP guests of the famous festival of American cinema.

From one to its other facade the distance is less than fifty meters, but it is a matter of prestige to conquer that distance with a limo, and to come out of it axactly infront of the audience admirers. Actors like Angelina Jolie, Brad Pitt, Tom Cruise, Cindy Crawford, Melanie Griffith, Antonio Banderas, Michael Douglas, Catherine Zeta-Jones, and whoever else you can think of, serve the public a show of clothes from fashion as parallel expensive models. 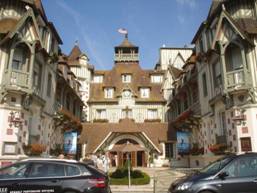 Elitsa, along with other Bulgarians lined up to look at the stars Jolie-Pitt family, but she 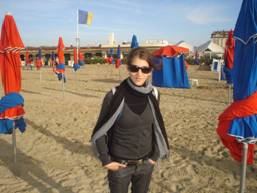 only stretched her neck over the crowd of onlookers and more bodyguards without being able to glimpse them point blank, so she had to watch the monitor. Moreover, any self-respecting star rents a booth, where they keep their beach gear all year, incase they accidentally fly over the Republic, inbetween other commitments. These wooden changing rooms are a like cells without windows, but an essential part of deauville glory. They’ve been rented out by top-100 stars in Hollywood for years, and are insanely expensive. There are no free ones, and would free up only if a star rises, Oscar in hand.

adventurers get among them. The hosts enscribe on a wooden rack the celebrity’s name, who could freely to bathe in the pool and the beach. Naturally, such a tradition is kept since the last century. Although the beach is sandy, and the umbrellas protect you from the wind, you can’t dip in the ocean as casually, as in our seas. The waves push too hard, the tides must continuously be monitored. With a seconds prescision meteorologists report the time at which the ocean goes farther away or comes closer. Another landmark, which gathers crowds of French aristocrats and English dandies are horse races. After the award of the Arc de Triomphe, given by the Emir of Qatar in Lonsham, next in prestigeus tournament for jockeys is namely in Deauville, where alot of ladies do not fail to show off their new hats. The place is obviously worthwhile, since the legendary Coco Chanel opens right here one of his first fashion boutiques for hats. As a favorite resort for poets sucha as Guillaume Apollinaire Deauville holds the reputation of more than a podium. Many of the best traditions of this renowned “Golden 20” -the 20s of 20th century, when the Norman picturesque village near the ocean became a world famous resort for the rich. Golf landed here in 1928 when they built Hotel du Golf for maniacs golfers and established a competition. They even had to open an airport in 1931, Designer Yves Saint Laurent also had a villa in Deauville, where his favorite breed of French bulldog hounds ran freely, all called Muzhik but numbered. Since when do snobs actually go to Deauville and how did the resort turne to what is today? Hundreds of thousands of people have built millions of towers and turrets of sand in all sorts of banks, only who was first to a build a castle of gold here ? The visionary was Auguste, Duke of Mornay, politician

and financier, half brother of Napoleon III and emblematic figure of thr Parisian beau-Monde. Back in 1858, while drinking Calvados with banker Donnon and architect Brennie in the house of

Dr. Olif in the provincial resort Trouville, Duke de Mornay fantascised about erecting the “kingdom of elegance”. The gaze of the three intelligent men reached the dunes near the neighboring village, consisting of several houses near a church. It was then called Deauville, only it was written as “stuck to the back town” (Dosville), and not as exalted as its current spelling makes it: a city water (Deauville), pronounced the same way. The first shiny castles perched on the beach of Deauville in 1860 as a last stop was designed from Paris with an outrageous for its time railway station. Viewed from an airplane the tracks expand as a tulip and obviously the architects and image makers were illuminated by the same general idea how the “beach blooms”. The second boom of Deauville happened only half a century later, when the mayor Desiree Le Oc together with Eugene Kornyushe, manager of the famous restaurant Maxim’s in Paris, invested in a casino – a glamorous and deceptive gambling palace, along which the grew the first major hotels in the Deauville “Belle Epoque”.

Investments do not stop until the end of the century and the resort becomes a magnet for stars. Since 1975 it’s the capital of the 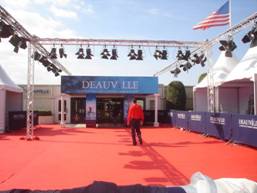 Festival of American movies, but by 1999 – and Asian movies were welcome aswell. In Deauville red carpet is stretched throughout the year. City Hall takes care to make a clearly lined calendar of events for this year and the next, so now it’s clear what weekend what will the focus be on- golf tournament, regatta, horse race, film festival, culinary bacchanalia, competition for sand figures (i have memory of a 5meter tall Tutankhamun, namely made of sand in Deauville). 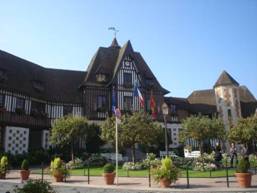 In late October, Deauville was where Nicolas Sarkozy met Merkel. With them was the Russian president Dmitry Medvedev. The media then spread the news that the three heads of state spoke about a new development contract for the Old Continent. The weekly “Gazeta Polska” even wrote that in Deauville the three top politicians “modeled in sand Europe’s future”. 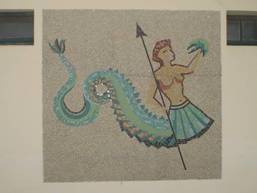