It’s really surprising how the hungarian capital managed to win the race against the centuries old traditions of Paris, London, Bonn even Vienna and espetialy Strasbourg, where, more than 500 years ago, a Christmas tree was erected in the central square, accompanied by the sound of an orchestra, for the first time.
Today in Budapest over a hundred wooden huts offer traditional folklore, hand made gifts, along with music, city design and culinary wonders.
Above the sqare, at wich Vatsi street ends, shines a huge Christmas calendar. The entire facade of the building above a little sweet shop, called Zherbeau, is tuned into a mural, while the windows are the days of december. Every day at exactly 5 o’clock in the evening they light up.
This hour, at wich during winter the day gives way to the night and the violet twilight makes the handworkers huts with their products even more colourfull, is already the favourite place for the citicens of Buda and Pest.

The sight is worth it- the workers are stopping by on their way back home, mothers are comming with their children and families are bringing their guests, to show them something they won’t see for the rest of the year. 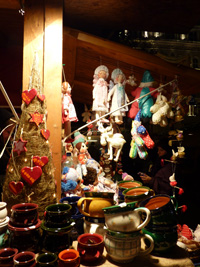 For old people it’s also a joy to warm up with a glass of wine, watch the callendar’s lights and listen to the orchestra. The square gets overcrouded and i understand it’s considdered prestigeous for an orchestra to play on the at the bazar.
It surrounds the musicians like a caleidoscope box and protects them from the bitter cold.
“I try to be here every day, the fun is worth it. Yesterday I brought my aunt and niece here. If i miss the opportunity to come here, I’m not in a good mood the next day. When I’m here, I’m proud, that my city has something so beautifull and so human.”, says Matha Bauer, who I’m meeteing infront of the christmas calendar. We trade some words in english and drink the warm wine with cinnamon and ???????? together under the sounds of chardash.
The Gyulwein wine can be found all over Western Europe around Christmas, but Budapest has taken the artistic approach of Brusseles, where they drink the wine in ceramic cups, which people can take home as a souvenir. They also serve as fantastic coffee cups throuout the year.

Collectors from Brusseles also buy simmilar cups as a memory from the Christmas bazars- they’re red, cost 5 euro each, and on them there’s a sign in french, saying “the joy of christmas”
In Budapest, in the same size, they cost two euros and are white with a blue filigree, and so that foreigners don’t wonder what does the inscription “Bйkйs, Boldog Karashonut” above the name of the city means, the greeting from Budapest without becoming bland, is translated English as “Peace and Merry Christmas. ”
On Vyoroshmarti square pieces of wood in the forms of the Infant, Mother of God, St. Joseph and the Magi in Bethlehem hide under a twenty-foot tree, and after itstart the huts with the real magic: caramelized red apples, rotating skewers, on which is baked the Christmas rolnik (in Prague the same good is called trdelnik), it’s a thin crust which is baked on rotating shafts, flavored with caramel, coconut or almonds. Typical for Budapest is pork shank and pieces of smoked meat, along with trays with (oriental) leaves and (Bavarian) sausage with mustard. The world is globalizing, no way to avoid that, but the delicacies also show that we are at the heart of Europe: there are western and eastern delicasses.
The emphasis is on cookies with glaze – trees, bells, a red-cheaked grandfather, calves, bear cubs.

Baked biscuits in the form of scarlet hearts decorate the front door. They are beautiful and worth only 3-4 euros each, but I’m 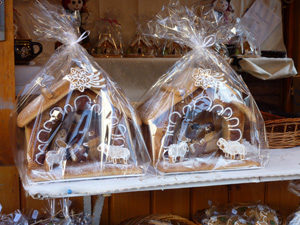 reluctant to buy them, because the inscriptions “Merry Christmas” or “Happy New Year” are in Hungarian and are unlikely to have any effect in our latitude.
Hungarian tradition dictates that the house is to be decorated with garlands of cinnamon sticks, small apples, dried lemons, bay leaf, so that it smells of celebration and humility. The ready strings are 5 euros the huge ones- 8, but it is best to make your own and knit them – for small cents you can get all supplies nessessary: twigs, fruits and bells. Here pile up the most people – not only because of the low prises and fragrances, but because every home needs an authentic decoration, with which the hostess gives the home a personal kind of love and hope in a sole and unique way. There’s no need to translate translation a red heart made of wood with apples, cinnamon and cheerful green ribbons.
Typical for “karashonut” – the Hungarian Christmas are smoked pork shank and clay pottery. Therefore the square is overflowing with cups, sugar bowls, ceramic trays and even toys for the tree. A hit in early December is to obtain a seal in the square “Vyoroshmarti” before the Yule log – a metal ingot with the letter of your name. They sell them with a stick of red wax, and with sufficient time to send letters of wishes to Santa Claus.

Of course, the Christmas Bazaar is happening in enchanting illuminated cityscape. Both banks of the Donau are like garlands, 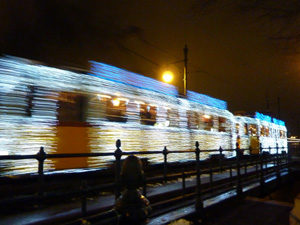 winning over darkness and cold, and the contours of the hills with fishermen towers complete the decor of the winter splendor.
In several ways the Hungarian capital has adapted to making wishes come true before Christmas. One of the trams illuminated with countless lamps flies every hour along the coast – The tram itself is like a theatrical play! Among the passengers for a moment you glimpse Santa and snowwhite and can’t help but believe that miracles are possible.