Cold and wind chill the Tierra del Fuego in August 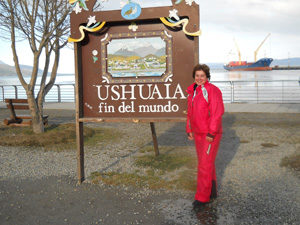 In Ushuaia, first came to prison. As a joke – but in prison, and the most distant – at the opposite end of the earth. Cells, cold corridors, chains and leg cannonballs in the deafening accompaniment of an orchestra like in war films – where did you bring me, God? I went on an official celebration for extreme skiers and tourists in the last city in the world of the southern hemisphere, only 600 miles before Antarctica. The ceremony had to take place in the city museum, but it was scary dungeon. I wasn’t used to transatlantic flight, the change of seasons, the nearly 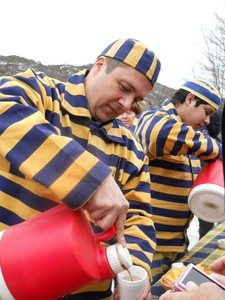 Ushuaia is a top resort for skiers over the world-famous port, where shipments leave for the White Continent, including the Bulgarian. Right here in the last triangle of land in Latin America the Andean peaks dive below the sea surface before they “float” in the belt of icy Antarctica. Did I say sea? The Pacific and Atlantic Oceans merge their waters here, there’s no other city from here to the poles and even the U.S. highways end as if cut with scissors nearby. At first sight the city is tight as in a sandwich between evil sharp peaks covered with snow, ice and ocean with boats and ships loaded with colorful containers. Ushuaia experienced the twentieth century as a penal colony as Siberian Gulag on the Southern Hemisphere. On the opposite side of the globe in August howl the wildest blizzards. Because of wind from the White Continent the temperature of minus five feels like minus thirty-five degrees. Nature itself brings terrible premonitions and gives no chance of survival if you fall asleep outdoors.

Not one edible plant in the local flora and very little animal types survive in these icy conditions. There is hardly a more hopeless and sinister place from Ushuaia on the globe- the world’s end! The archipelago was discovered by the world in 1520 by Fernando Magellan. 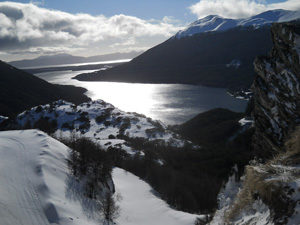 The seafarer saw from his ship the fires of local tribes, not descending to the shore, he just named it Tierra del Fuego – Land of fire. Two centuries later appear the Anglican missionaries to educate the natives and make them radiate in God’s grace. One of the first educators are Jose Beauvoir, Don Bosco, Padre Alberto de Agostini, the nun Maria Oksiliador. The Republic of Argentina was founded two hundred years ago, and a proposal to make the south a penal colony came in 1883 from President Julio Roca. He argues with world politics and shows that at the same time France banishes its rebellious citizens in New Caledonia and Algeria, and Britain sends uncomfortable subjects in Australia. A heavy cannonball, tied with chains around the feet, erased the difference between criminals and political prisoners. Shocking or surprising, today the Ministry of Tourism promotes extreme experiences “At World’s End” and serves the first cocktail in prison … authentic. Built in 1902, when it was inhabited by over 600 convicts, and until recently served as intended. As a joke – but not quite fun they serve a “License of Freedom” to hardcore skiers and tourists. It says, that from tonight at x hours you are free – with date, signature and seal. Without it you’re not allowed to go outside in the winter night. And it’s not surprising to have an hour long mix of fog, storm clouds and snow at day. Hurricane lifts snowdrifts and raises them in a spindle like a tornado before throwing frost in the faces of passersby. 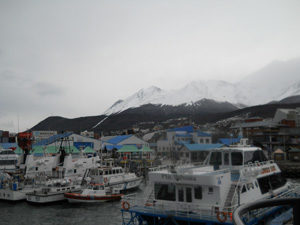 The storm freezes not only the limbs, but the bones aswell.

In this climate romance grows with difficulty, it’s more of a scale to match your Stoicism (and adventure?) for dozens of expeditions. Who else would come to in Ushuaia, the world’s end? So far, swim or fly three types of aliens: Sailors, extreme skiers and tourists. Throughout the summer (from our perspective, because in Tierra del Fuego winter is in August and the summer – in February) in the peaks of Patagonia train the national teams of Italy, Croatia, Germany, and stars of the sport of Alpine individual programs. It’s perfect for slalom, and it could become a location for the World Cup, if only it weren’t not so far! Otherwise they do not complain about the lack of tourists – more than two million skiers come only from Brazil every winter. Besides alpine skiing and snowboarding, glorious and widely practiced is cross-country skiing, and for entertainment- snow scooters, tours with snowshoes – broad flat platform boots, and sleds with dog harness. Because of brutal cold, the snow on the slopes of the Andes does not melt, and continuously builds up. It’s molecules do not know the liquid state and the cover is dry, does not stick to the skis and can be seen through. 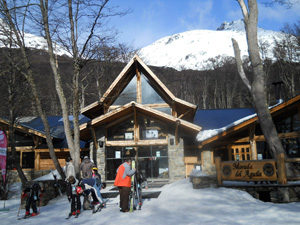 One fashion in extreme tourism, however, shows how gold is removed from this comfortless frozen land. In Ushuaia, which is a free zone, everything is sold with the tag “The End of the world.” However, prices are super high for Argentina, comparable to prices in Europe, plus all possible charges and taxes. How many people, however, among your friends may say that they have reached the end of the world? In our idea of tourism as a normal summer vacation enters the sea. But to the American tourist it is considered an achievement to conquer the meridian stretch from Alaska to Antarctica. This bright chimera infects maniacs of off-road – with 4×4 SUVs and more ambitious families with children and not so expensive cars. Ushuaia can be reached by the National No 3 in Argentina, but this road doesn’t always resemble a highway. It ends here, but to the other end of the extreme destination in Alaska, the distance to the North Pole is exactly 17,484 km. These 17.5000 km light the wick of the extreme tourist! Some mexican left even by bicycle on the way back from Ushuaia to the north to Anchorage, but that nobody heard about it, at least here. Just Buenos Aires, the Argentine capital, is reached after 3079 km. You can go by bus for three days by boat or yacht for half a month and of course by plane in less than four hours. The miniature airport in Ushuaia is no less spectacular than the airport of the famous Singapore: metal birds perch on the piece of land among the ice and ocean waves, and time regularly makes fun of the schedule. Even more to the south of the Strait of Magellan the two largest oceans in the world converge in one channel, almost invisible in school globes, but important for shipping in the twentieth century. It was opened in 1830 by Captain Robert Fitz Roy, who set off with two ships to prepare an expedition for Charles Darwin to seek evidence for the origin of man and the world. One of the vessels of Fitz Roy was called Beagle and became the godfather of the shortest route between the two oceans.

The channel is wide between 6 and 14 meters, serves as a border between Argentina and Chile. 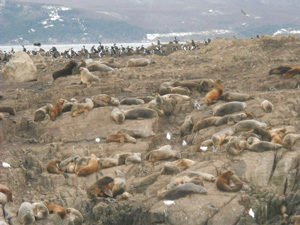 Whoever comes to Ushuaia, is rewarded with a sea trip – catamarans roam from one to the other end of the canal Beagle and the pleasure is worth it. You get to see the lighthouse of scouts. The picturesque red tower against the freezing Sea is only supported with equipment, because there are no conditions that support human life around it. This is the penultimate light before the South Pole. The next stop is the island of seals, where thick-skinned sea lions live in colonies of cormorants. From a distance the big birds with large black and white feathers look like penguins and are quite different from full black cormorants in our seas. Some primitive tribes inhabited the region until recently. On the other side of the Beagle Channel lives the last pure yamanas – the 80-year-old Christina Calderon. Yamanas were completely naked – or at least in earlier times, unlike the other people, silknam, who wore animal skins. Yamanas smeared their bodies with seal blubber and kept the fires burning in their huts, and even in the middle of the canoes, with whichthey went hunting. As reason for their extinction scientists link the diseases of modern times. Nude sunbathing, they say kept them safe! 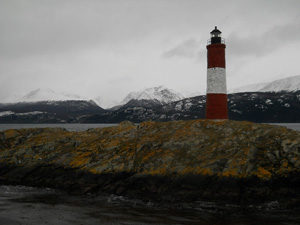 The cold and rain do not allow their clothes to dry completely and wet clothes to breed viruses. In the museum of yamanas they say that their ancestors were with significantly larger body shapes and proportions than sailors. Seen from the ocean, local Europeans were impressed with their huge legs – “Pata gones” with local words and hence the whole area bore the name Patagonia.

After his travels, six centuries ago, Magellan was endowed with the right to stand with hat in the presence of the king. Seaman tradition dictates that whoever passes Cape Horn, also doesn’t have to remove his cap before the heads of state. For modern tourism to reach Ushuaia is as extreme an adventure as once was Pilgrimage to the Holy Sepulchre. So at the end of this postcard from Ushuaia, the world’s end, I sign:
Milen Del Fuego Dimitrova